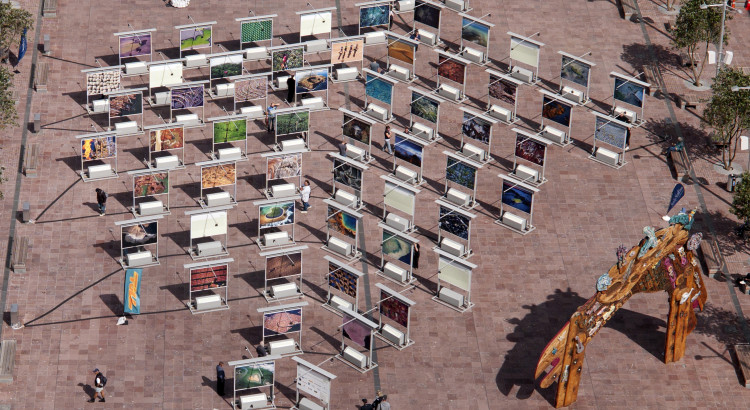 One People One Planet hosted Earth From Above in Auckland. 120 enormous inspirational photographs of planet Earth in all its beauty and fragility…an internationally acclaimed “living” exhibition that evolves and changes as famous French photographer Arthus-Bertrand takes new images from planes, helicopters and even hot air balloons. It has toured the major cities of the world for a decade. Over 200,000 people in Auckland joined the estimated 100 million people who have flocked to see it as it tours the world.

Auckland was an exceptional exhibition, with 50 new photographs printed especially, with the photos set out in the shape of the Kiwi emblem, a giant silver fern, in Aotea Square. This was a world first : the first time the French owners have allowed anything other than a strict linear display anywhere in the world.

The haunting music from Arthus-Bertrand’s feature length movie, Home, played across the square as crowds viewed the pictures, walked the giant walkable map, or hung-out in the sustainable “village” made from recycled shipping containers painted by young children from various schools under the direction of staff and students of Whitecliffe Art School.

Earth From Above is an incredible photographic display, and an environmentally-conscious  scientific photo record. Yann Arthus-Bertrand logs the exact location of each photograph enabling scientists to return to the same spot in the future, to assess by how much the environment has changed and whether for better or for worse. It is a living record of the world our children will inherit.

The children’s photo-and-essay competition Voices and Views of Young New Zealand ran alongside the exhibition, to add the voice of the children.

Check out the Earth From Above gallery